®/™©2020 Yummly. All rights reserved.Part of the Whirlpool Corp. family of brands

Christmas and holiday entertaining is not for the faint of heart. We pulled our favorite appetizer recipes to help get your planning started.

From Halloween to New Year's Day, we have a green light to eat indulgently; with every party invitation comes the expectation of decadent bites. That gives cooks like us free rein to blend, braise, and bake as we please. But, having that many options might be a bit overwhelming. For those who develop analysis paralysis in the search for holiday appetizers, we put together a manageable list of our finger food favorites to get you started. It even includes vegan, paleo, keto, and gluten-free options.

Holiday Appetizer Puffs by Taste of Home
Finding someone who can resist a cream cheese-stuffed puff might be a challenge. What's not a challenge is making these bites. They're made with choux pastry (pâte à choux in French) — the same dough used for éclairs. It seems tricky, but actually, it's a dead-simple formula that creates a curiously hollow pastry primed for stuffing with soft cheese. The hardest part of making them is the cleanup.

Festive Holiday Appetizer by My Loving Oven
You can always depend on phyllo dough to carry you through a party. These festive bites use a muffin tin to shape the butter-brushed phyllo and create a cup for the cream cheese and cranberry sauce. If you're feeling fancy, you can swap goat cheese for the cream cheese.

Baked Brie en Croute With Thyme And Fig Jam by Serious Eats
It would almost be bad form to deprive guests of a baked brie at a holiday party. Like a cheese plate, it's something people expect, but this recipe uses a few unexpected ingredients that make for subtle Christmas flavors. The thyme gives it a gentle, piney accent while the fig contributes nut and honey flavors that complement the warmth of the holidays. This brie is also easy to make — if you can wrap a Christmas present, you can wrap a wheel of brie in puff pastry.

Cranberry Pecan Cheese Ball by Dessert Now, Dinner Later
Only slightly more ubiquitous than the baked brie but substantially more imperative is the cheese ball. This recipe mixes together cheddar and cream cheese for the base. It's then shaped into a ball and rolled in cranberries, green onions, and pecans to give it holiday flair as well as a crunchy-chewy texture that contrasts with the creamy cheese center. There's no question why this one is a recurring contender for favorite Christmas appetizer recipe.

Christmas Tree Pull-Apart by Eclectic Everyday
There's a surprise inside this adorable Christmas hors d'oeuvre: Cheese! A mix of mozzarella and cream cheese is wrapped in refrigerator dough before being baked into a golden-brown treat. It's then brushed with melted butter and sprinkled with herbs, turning it into a edible Christmas tree. It's almost too cute to eat. Almost.

Puff pastry Christmas Trees by My Little Italian Kitchen
These trees are scaled down from the previous giant pull-apart bread sculpture. They look elegant at the end of a long skewer, but they're not nearly as difficult to make as you might think. It involves layering ham on dough, cutting it all into strips, and then creating a little accordion in the shape of a tree before baking. Rather than laying them out on a tray, you can stand them up in a block of hard cheese. The cheese does double-duty — when the trees are all gone, guests can cut off pieces of cheese to go with crackers. If you want Italian flavor, consider using salami in place of the ham and sprinkle Italian spices into the cheese mixture.

Jalapeno Popper Pinwheels – An Easy Holiday Appetizer by Small Home Big Start
If you're a fan of the standard pinwheel party appetizer, you'll be a super fan of these baked bites of cheer. They only require five ingredients (two of them are cheese!) and most of the effort goes toward spreading the cheese mixture on the refrigerator dough. After that, it's all about baking and eating.

Holiday Yogurt Dip With Pomegranate by A Couple Cooks
This yogurt dip (also called labneh) is easy to make, but it does take time. The time goes toward straining the yogurt in cheesecloth or a coffee filter overnight. After that, just fold in some olive oil and sprinkle with herbs and pomegranate seeds. If these aren't quite the flavors you want, you can try other herbs and flavorings. If you choose to make this, you will never stop making it — it is that good.

Slow Cooker Honey Dijon Chicken Wings by Fit SlowCooker Queen
Slow cookers are party machines — they make entertaining crowds less burdensome with their set-it-and-forget-it technique, but we don't want to limit its functionality to cheese dips. For this recipe, you just throw wings into the slow cooker with mustard, honey, and red wine vinegar and then let them cook for four to six hours on low. Set them out with ranch and watch them disappear.

Sweet and Spicy Slow-Cooker Pineapple Meatballs by Cooking and Beer
The unwritten rule for holiday parties is that you must serve tiny meatballs on toothpicks. We're not about to break any rules here, so we picked out a slow cooker cocktail meatball recipe that's sweet and spicy. The one caveat is that there are a lot of ingredients, but they're mostly spices. Other than that, this is wickedly easy. Prep time is only 15 minutes and after that, the only thing you have to do is replenish the serving platter.

Salt And Pepper Tofu by Omnivore's Cookbook
Holiday parties are notorious for heavy, meaty food but as entertainers, we try to be mindful of dietary restrictions, including when a guest has a vegan diet. For our vegan/vegetarian selection, we pulled a crispy tofu recipe. It's simple both in method and flavor. Drain, strain, and slice the tofu before sprinkling it with just salt and pepper. It's then pan-fried and served with festive fried green and red peppers and dipping sauce.

Roasted Eggplant With Sun-Dried Tomatoes by eCurry
If you're familiar with baba ganoush, you know how rich, creamy, and satisfying eggplant can be in the form of a spread or a dip. This recipe is very similar to baba ganoush, but instead of anchoring it with tahini, it uses sun-dried tomatoes. The eggplant maintains its creaminess while the tomatoes add a brazen sweetness.

Simple Crab Salad by Nom Nom Paleo
Accommodating a paleo diet isn't quite as easy as vegan/vegetarian diets for a holiday get-together, so we made it our duty to find a festive one. This recipe uses endives as a vessel for crab (a Christmas delicacy in Northern California). It's mixed with mayo, scallions, and parsley. To be honest, it probably took longer to write that sentence than it does to make. 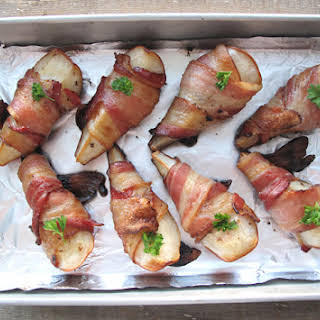 Bacon Wrapped Pears by A Squirrel In The Kitchen
If you thought the last recipe was easy, this one will blow your mind! There are two ingredients: bacon and pears. Can you guess what the directions are? We thought so. It really is that easy and your paleo friends can get their last bites of Bartletts for the year. 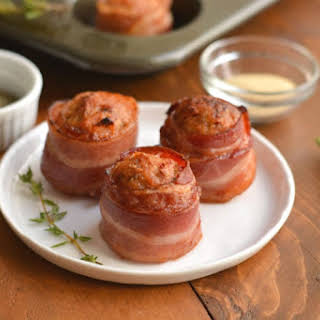 Keto Bacon Sausage Meatballs by Meal Prep On Fleek
This appetizer is not just for those who follow a keto diet, it's also for bacon (or meat) enthusiasts. It's a pretty simple formula: Mix herbs with the sausage, wrap it in bacon, and bake it.

Keto Cheese Crackers by Ditch The Carbs
Crackers need not be a concern if you're entertaining people on a keto diet. These crackers are made with mozzarella, almond flour, cream cheese, and an egg. Prep and cook time combined is 20 minutes. If you need more selling points, they're also gluten free, grain free, and contain no sugar. 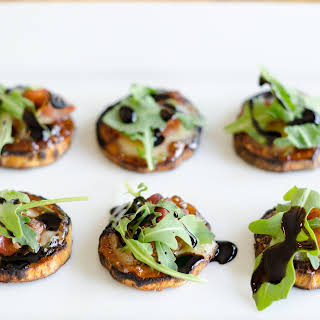 Fig Prosciutto Bites by The Chronicles of Home
With gluten-free crackers already on the list, we selected a recipe for fig and prosciutto that sit atop slices of sweet potato. The potatoes are first roasted then slathered with fig jam, sprinkled with cheese, and crowned with prosciutto. They have all the charm of passed hors-d'oeuvres without all the wheat.

Gluten-Free Broccoli Ham N Cheese Crescent Bites by Petite Allergy Treats
While crescent rolls are adaptable for countless appetizers, they're off limits for people with a sensitivity to gluten. This recipe is a blessing for celiacs who longingly look at pastry bites as forbidden finger food. It does include some specialty ingredients, but it's worth the effort to find and to make in order to feed your gluten-free friends with joy for the holidays.